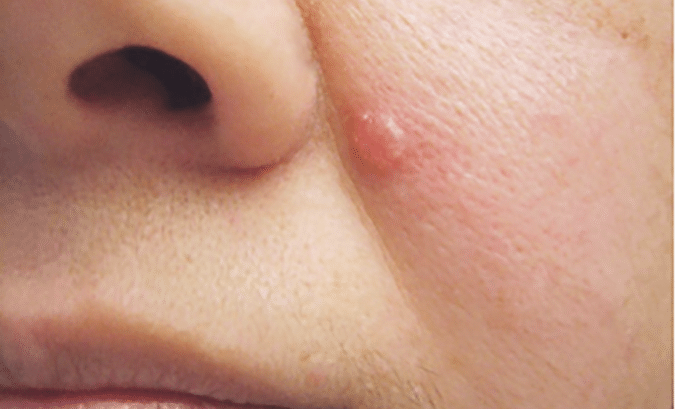 Skin cancer is the most common form of cancer and its incidence continues to grow. Although skin cancers can occur on any part of the body, 80% appear on the face, head or neck where they may be disfiguring as well as dangerous.  If the skin cancer is small, the procedure usually can be performed quickly and easily as an outpatient procedure. In many cases, the resulting scar will be barely visible, or will be concealed within the natural folds and contours of your face.

BASAL CELL CARCINOMA
Most common and least dangerous form of skin cancer. It tends to grow slowly and rarely spreads beyond its original site. However, there are also different forms of basal cell carcinoma, such as the “sclerosing” type that will require more specific treatment.

SQUAMOUS CELL CARCINOMA
Second most common type of skin cancer. Squamous cell carcinoma frequently appears on the lips, face or ears. If allowed to expand and is not treated, it can sometimes spreads to distant sites including lymph noses and other internal organs.

MALIGNANT MELANOMA
Least common, but the most dangerous form of skin cancer. If discovered early enough, it can be completely cured. If it’s not treated quickly, however, malignant melanoma may spread through the body and become life threatening.

Malignant melanoma is usually signaled by a change in the size, shape or color of an existing mole, or new growth on normal skin.

The method used to remove skin cancers depend largely on the type of cancer, it’s stage of growth and location on the body. If the cancer is small, it can be removed by simple excision, laving a thin barely visible scar. There are other non-surgical methods as well which include radiation therapy, cryosurgery (freezing the cancer cells); topical chemotherapy, (application of anti-cancer ointments and creams to the skin). Moh’s surgery, is a procedure in which the cancer is shaved off one layer at a time and examined under the microscope until the margins are clear. If the cancer is larger in size, or if it has spread to the lymph nodes, a larger more complex surgery may be required.

Skin grafting involves the transfer of skin from a healthy part of the body (donor site) to cover the injured area. The graft is said to “take” when new blood vessels and scar tissue form in the injured area. In addition all grafts leave some scarring at the donor and recipient sites. Composite grafts involve taking usually 2 types of tissue in one graft (such as the removal of a portion of the ear, which contains both skin and cartilage to help reconstruct missing parts of the nose.

Flap surgery is a complex procedure in which skin, along with the underlying fat, blood vessels and sometimes the muscle, is moved from an adjacent area near the defect or from another healthy part of the body. In some flaps the blood supply remains attached at one end to the donor site; in others, the blood vessels in the flap are reattached to vessels at the new site using microvascular surgery. In general, flap surgery produces better cosmetic results than skin grafts.

After you have been treated in Dr. Binder’s surgery center, you will return for regular follow-up visits to insure that there is no recurrence of your skin cancer.

The following precautions should be taken: