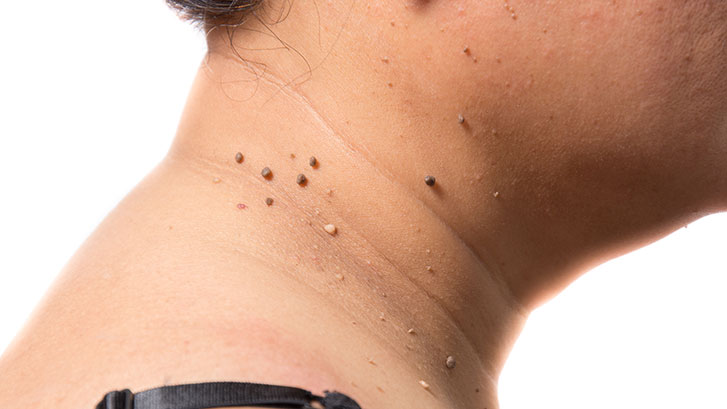 It goes by many names: beauty mark, patch, spot, birthmark, etc. But for the sake of clarity, let’s call it what it is: a mole. It could be harmless or it could be the warning sign of something more serious.

Do you have any suspicious moles that you’ve been secretly fretting about? Are you worried that your mole might be cancerous?

Since most skin cancers start in irregular spots, it is important that you check your skin every few months. Ask your partner or physician to help you assess areas of the body that you can’t see yourself.

Let’s start with the good news: the sooner you identify a cancerous mole, the better your chances are to avoid more serious health concerns down the road. For example, patients with a Stage One prognosis have higher odds of beating cancer than those with a Stage Four assessment. Before moving on, let’s define these terms.

STAGE ZERO – This diagnosis means that there are no cancer cells detected yet, but the presence of abnormal pre-cancerous cells that must be monitored.

STAGE ONE – The earliest stage of cancer growth, this phase is typified by the fact that the affected cells are all contained in one finite area of the body.

STAGE TWO – This is when cancer has spread to adjoining regions of the inception point.

STAGE THREE – As cancer spreads further, it could infect your lymph nodes or other sensitive tissue matter.

STAGE FOUR – At this point, cancer has metastasized and branched out to various parts of the body, making its eradication more complicated.

But complicated doesn’t mean impossible, so let’s focus on the positive and work together to fight cancer before it spreads. Here’s how to determine whether or not your moles may be cancerous.

Types of Moles and How They Look

Since this last form of a mole is the most potentially hazardous, let’s take a closer look at its symptoms, features, and variations…

Melanoma is a type of skin cancer that begins in melanocytes. It is potentially dangerous because it can invade nearby tissues and spread to other parts of the body, such as the lung, liver, bone, or brain. Since most melanocytes are in the skin, melanoma can occur on any skin surface. It can develop from a common mole or dysplastic nevus, and it can develop in an area of apparently normal skin. In addition, melanoma can also develop in the eye, the digestive tract, and other areas of the body.

Often the first signs of melanoma are a change in the shape, color, size, or feel of an existing mole. Melanoma may also appear as a new colored area on the skin.

The early features of melanoma are:

The only way to diagnose melanoma is to remove tissue and check it for cancer cells. Your doctor will remove all or part of the skin that looks abnormal. Usually, this procedure only takes a few minutes and can be done in a doctor’s office, clinic, or hospital. The sample will be sent to a lab and a pathologist will look at the tissue under a microscope to check for melanoma.

If you want to help prevent melanoma, then you need to be sun smart. Here are some tips on how you can be sun smart:

You may be more at risk of developing skin cancer if you have:

The stages outlined above give doctors and patients a roadmap of how to maneuver the detection and treatment of potentially cancerous moles. Case in point: one comprehensive study recorded the survival rates of approximately 60,000 patients recovering from melanoma diagnoses. This is what they found:

Don’t be a statistic. Take control of your wellbeing, consult a trusted medical professional, and be on the lookout for suspicious growths.

Getting Your Moles Checked

If you are worried about any mole that you have, please don’t panic. Our skin is varied and complex; it evolves and changes in response to how we age and grow, and it also reacts to environmental conditions such as sun exposure. It may be nothing to worry about, but awareness is always encouraged.

Regardless of your particular physiological situation, knowledge is the best medicine. If you have any questions or concerns, you should schedule an appointment with Dr. Binder. The most effective way to ensure that you don’t have skin cancer is to have your suspicious moles checked out and, if necessary, removed by a qualified doctor. As noted in the statistics above, moles that are diagnosed early can be treated for skin cancer. While the “Big C” is a scary notion to us all, we must work together to minimize its risks, maximize our awareness, and move forward to a healthier tomorrow.